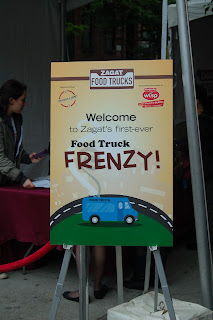 Monday, May 23 was Zagat's very first Food Truck Frenzy and I was fortunate enough to be invited to attend. On my way there it was raining and I wasn't sure if it would be as enjoyable in a terential downpour. Since I am more like a flying monkey than the Green Witch and water doesn't melt me, I decided to make the best of it. I'm glad I did too, because it was wicked.

When I arrived, the first thing I noticed was how many others braved the storms and came down to 21st and 22nd streets for some vehicular vittles. Initially I just wandered around taking in the sights, admiring the colorful trucks, marveling at the lines formed at each truck. The experience was sort of like being on a mid-town cruise ship; lines for food, food with lines, and more food and more lines.

The mobile chefs and their crews were obviously preparing for long lines though, because all of the lines I stood on moved rather quickly, bar one. The line that took the longest for me was the Korilla BBQ tr…
Post a Comment
Read more
More posts